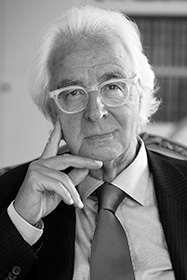 Partner I Former President of the Bar Association

Having obtained his Bar Certificate in 1971, Me Marc Bonnant started his first firm in 1973 where he specialized mainly in the areas of criminal law, business law, banking law as well as in international administrative and legal mutual assistance.

At the age of 41, Me Marc Bonnant was elected the youngest ever President of the Genevan Bar Association.

He founded the firm Bonnant & Partners in 1996.

In 2003, Me Marc Bonnant received from Maurice Druon, permanent secretary of the Académie Française, the Prix du Rayonnement français for his contribution to the promotion and defense of the French language. In April 2011, also for his dedication to the French language, he was promoted to Officier de la Légion d’honneur by Marc Fumaroli, member of the Académie Française.

He practices in French, English, German and Italian.

Me Marc Bonnant is a member of the Genevan Bar Association and of the Swiss Federation of lawyers. Besides his professional activities, he reached the rank of lieutenant-colonel in the Swiss army.